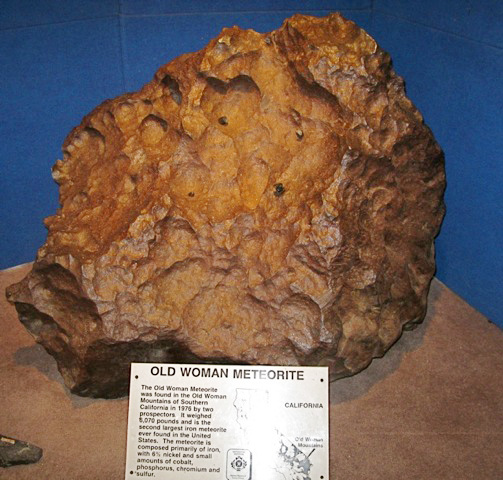 In late 1975, three prospectors found the meteorite in the Old Woman Mountains of San Bernardino County, California. Several months later they took Dr. Roy Clarke, Curator of Meteorites for the Smithsonian Institution in Washington D.C., to the site. He confirmed that it was a meteorite.

Since the meteorite was on public land administered by the Bureau of Land Management (BLM), the prospectors filed a mining claim on the site. To their disappointment they learned that meteorites were not a locatable mineral as defined by the mining law. Instead, under the provisions of the Antiquities Act, meteorites found on public land were considered objects of scientific interest and therefore should go to the Smithsonian Institution.

Removing the meteorite from its resting place proved difficult because of the rugged terrain, the weight of the meteorite, and the desert’s summer heat. It took the assistance of the U.S. Marine Corps to get the job done.

A rigging team from the first Marine Division Support Group climbed to the site and, using equipment lowered to them by helicopter, managed to get a double thickness of cargo net under the meteorite. A helicopter from Marine Heavy Helicopter Squadron 363 easily plucked the three ton meteorite from the mountain. They flew it to where it could be kept in California for a short period so people living in the state in which it was found could have a chance to view it.

The meteorite was placed on display at BLM buildings and museums in El Centro, Riverside, Redlands, Los Angeles, and Barstow. Public interest was intense and it was visited by thousands of people from all over the United States.

In March 1978, the meteorite was sent to the Smithsonian Institution in Washington, D.C. for study and to be placed on exhibit. A 942 pound (427 kg) section was removed. The section was closely examined to determine its chemical composition, mineral distribution, and rare gas content. These examinations indicated that the Old Woman Meteorite may be rare because of an internal structure that appears to be transitional between two well-known types of metallic meteorites.

According to Dr. Clarke, meteorites are the oldest objects available for scientific study and are thought to be left-overs from the time of the solar system’s formation. By studying the Old Woman Meteorite, scientists hope to learn more about the origin of the solar system as well as the environment in which the meteorite was formed and existed for about 4 1\2 billion years.

In September 1980, the Smithsonian Institution sent the meteorite minus 15% of its bulk (the 942 pound {427 kg} section) back to California to be place on permanent display at the California Desert Information Center in Barstow. Interested people are invited to stop by and have a look at a truly unusual rock.

Stony materials compose over 92% of meteorites falling to Earth. Iron and nickel make up less than 6%, but are the ones most commonly found. This is because iron meteorites look different from surrounding rock and are more easily recognized. Stony meteorites blend in and resemble rocks on the ground. The remaining 2% are stony-iron composite meteorites.

A chunk of metal or rock tumbling through space is a meteoroid. Upon entering the Earth’s atmosphere, it becomes a meteor as it heats to incandescence due to friction caused by the pull of gravity. If the object reaches the ground before it vaporizes, it becomes a meteorite. Most meteors never reach the Earth’s surface and appear as a streak of light as they vaporize. The average weight of a meteorite is about .0005 of an ounce, not much larger than a grain of sand.

Most of the meteors you see in the sky are very fine, dust size particles of rock left behind by comets that cross the Earth’s path. These particles are responsible for the meteor showers we see periodically throughout the year.

Larger meteors, like the one that became the Old Woman Meteorite, are not remnants of comets. They come from the Astroid Belt located in an orbit around the Sun between Mars and Jupiter. These meteoroids are probably fragments produced from the collision of asteroids since their composition is similar to materials found in the asteroid belt.

Gravitational influences from Jupiter and Mars can send some of these meteoroids in the direction of the Earth. Earth’s gravity can then attract the meteoroid and pull it into our atmosphere. If the meteor is large enough to withstand the heat of friction, it will fall to the ground as a meteorite.

Largest Iron Meteorite Found in U.S.A. – The WILLAMETTE – From Oregon – Now at the Hayden Planetarium in New York City – 14.2 tons.